Nissan VH45DE – Everything You Need To Know

Looking for a reliable and hard-hitting JDM V8? Nissan’s VH45DE makes a great case for itself. Find everything you need to know about this V8 here. 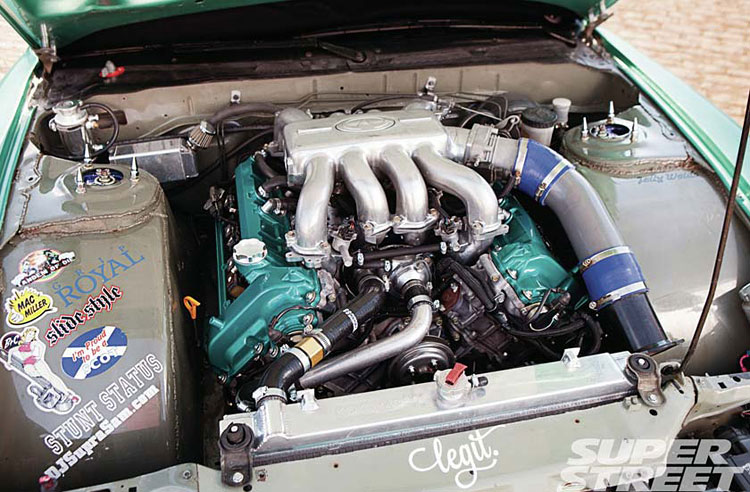 In the 80s, most cars in Japan were using 4-cylinder engines owing to their high fuel efficiency. While they were perfect for small city cars, the consumers wanted powerful motors for their sports cars, SUVs, luxury sedans, and pickup trucks.

Nissan Motor Corporation thought it is the right time to leap and introduced the VH45DE V8 engine in 1989.

Nissan’s biggest competitor in the Japanese market, Toyota, could not resist. They also introduced the V8, named 1UZ-FE, in the same year, which went on to power the LS400 for the US markets.

If you are interested in Nissan’s family of performance engines, you should definitely check out our KA24DE, CA18DET, VR38DETT and RB20DET guides.

A detailed look at the VH45DE V8

The VH45DE V8 was part of Nissan’s VH series, which spawned VH41DE later on. If you are contemplating this engine code, we can tell you that it provides all the information about the motor. “VH” stands for the engine line, “45” cites the 4.5-litre displacement, “D” signifies the DOHC (Dual Overhead Camshafts), and “E” denotes the multi-point fuel injection.

We will discuss the VH41DE in a while, but let’s first explain what made the VH45DE so famous in Japan early on and across the world afterwards.

First off, the VH45DE was among a very few reliable engines of the time that featured dual overhead camshafts. It was also lightweight because engineers used aluminum head and block in its construction. The aluminum build also enabled it to manage the temperature better. These characteristics made it very popular among tuners.

As said earlier, both the head and the block were made of aluminum to keep the weight low.

Other components that made it more efficient and lightweight as well as improved its tuning potential included forged steel crankshaft, forged steel connecting rods, 6 Bolt original bearing caps with studs, a long core bearing girdle, among many other parts.

And because the conversion parts of the VH45DE were easily accessible, this engine found its way in many cars used for motorsports events like drifting, drag racing, and dirt track racing.

Many of today’s drift cars are powered by VH45DE equipped with aftermarket single and twin turbochargers. The generous displacement makes for fast spooling turbos and easily accessible boost.

Nissan introduced the Variable Valve Timing (also known as VTC) for VH45DE in 1990 to extract more performance. Still, they allegedly could not publicize the improved power due to the “Gentleman’s Agreement” between Japan’s automakers.

According to this contract, the carmakers were bound not to produce a engine with more than 280 horsepower (209 kW; 284 PS) at the flywheel.

To abide by this agreement, Nissan disabled the VTC function during the engine examination, so it could not go higher than 280hp.

The standard transmission it came with was a four-speed automatic, but you can mate the engine to a manual transmission as well by employing an aftermarket adapter plate.

Because the emission regulations were very tight in America, Nissan had to ditch the VTC from 1996 forward before suspending its production altogether for the US markets in 1997.

However, the VH45DE remained in production in Japan until 2002.

If you are looking into Nissan V8s, then you should definitely check out the 1UZFE.

Production vehicles that used the VH45DE

The VH45DE was installed into the following Nissan vehicles from the factory:

The Nissan President Limousine was first unveiled in 1965, but the one that got the VH45DE came in 1990, built on the JG50 platform.

This third-generation model was a lot different from the previous generations. While its power figures were the same as the Q45, the engine continued to be a part of the limo until 2002.

The President boasted an extended wheelbase to provide adequate room and comfort inside. The salient features included silk wool wrapping on the power seats and a central console for the back seats. Check the VIP limo in this video:

There is a little confusion about the power stats of the 4.5L engine.

Rumors have it that the Q45’s actual output was 265 horsepower owing to its limiting exhaust. On the other hand, some believed that the VH45DE with VTC enabled was capable of yielding 310hp and 330 lb-ft of torque.

What exactly is the truth? Nobody knows!

If you are interested in swapping your engine with a VH45DE, you would like to know about its tuning potential.

The VH45DE does have robust internals with stock pistons boasting a flat-top design having recesses for the valves. This characteristic makes the engine forced induction friendly, allowing bolt on the supercharger applications right out of the box for instant power boosts.

Furthermore, if you want to shoot for high horsepower builds, you can employ turbocharger setups.

One of the biggest issues with forced induction setup on this engine, especially with turbochargers is heat management. Make sure your heat management is up to scratch on your build if you are thinking of going in this direction.

With the right setup including upgraded fueling upgrades, headers, valve springs, etc, you can easily bump the output to more than 500 to 600 hp. We are not 100%, but we have heard some people claiming 1,000 hp at a 9,000 rpm redline.

If you are interested in the differences of turbochargers and superchargers, drifted published an interesting article on the topic: Turbocharger Vs Supercharger – What’s Best?.

Perhaps, it is true because the VH45DE’s most regarded feature is its reliability. Owners that have looked after it well found it working excellently over the 200k mile mark.

However, it does not mean all these V8 motors are equally good.

Inspect the engine thoroughly before buying, especially if you plan to use it to its maximum potential. The VH45DE’s can be found at a reasonable rate, but that does not mean you pick any tired motor thinking you can just slap it in and add boost.

Although not perfect for drifting, the UK-based Team Japspeed employed the VH45DE V8 motor in their drift builds. Due to this engine, the team won many accolades in the British Drift Championship:

At the start, they used to employ the twin-turbo setup, but now they are working on a supercharged setup for the latest 370Z.

Bear in mind that the VH45DE was Nissan’s first V8, so it was bound to come with some weaknesses.

In trying to achieve too much with the stock internals, some of the motors created before 1994 came with teething problems due to plastic timing chain guides.

However, this issue was resolved later on when the automaker replaced these with metal-backed chain guides.

If you buy any of these problematic engines, we suggest you replace the plastic timing chain guides with the metal-backed chain guides.

Moreover, the countries where the ethanol content in gasoline is high this V8 can trigger injector problems.

If you are looking at the VH45DE as a potential powerplant for your build, you should also look at some of these other excellent JDM engine options:

As revealed earlier, Toyota built this engine the same year the VH45DE was introduced, so they both had a point to make. Both of these are still at war, and both companies believe their creation is better than the other is.

If we talk about the facts, we have found the 1UZ going over 1,000 hp, and it is readily accessible as well. It means you can buy it at a reasonable price.

On the other hand, the VH45DE is also cheap and does come with an advantage over its competitor, offering more stock bottom end and extra 500cc’s.

It is hard to decide a winner here because both motors are very robust and reliable, and they both work great on stock internals.

You can go for either of these according to your budget and ease of installation.

If you are interested in fitting a new motor into your S-Chassis, you could go for either the RB26DETT or VH45DE. However, you need to consider the following things.

If you do not have any budget constraints for a JDM build, then we recommend the RB26DETT. It has fantastic tuning potential and a huge aftermarket available.

On the other hand, you should not hesitate to fit the VH45DE – it is sturdy, affordable, and lightweight and will save you a packet. Tuning parts might be a little harder to come by in comparison.

The VH45’s little sibling does not fall behind significantly when it comes to power output. The 4.1L V8 could churn out a maximum of 268 horsepower, which is just ten hp less than the VH45.

However, there are some significant differences like shorter stroke, double row timing chain, and weaker alternator setting that never allowed it to take the top spot in the VH-series.

You can see the comparison between VH45 and VH41 below:

It did make its way in more vehicles than the VH45 though, including:

All in all, the VH45DE packs some solid internals to deliver immense potential power.

Considering it launched three decades ago and still is running successfully today shows the brilliance of Nissan’s engineers.

It has been a popular motor swap option for tuners in Japan, Europe, and America. Would you consider it for swapping in your next tuning project? Maybe you should.

Photography credit for the lead image to Super Street Online.