Nissan 1UZFE – How Good Is It Really?

We tell you everything you need to know about Nissan’s mighty 1UZFE v8. 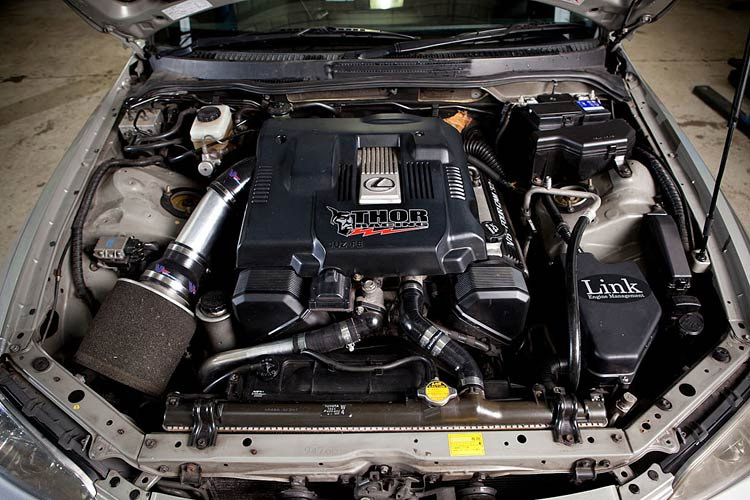 When Toyota’s 1UZFE engine was first released in 1989, it was revolutionary and ahead of its time. Back in the days, Japanese car manufacturers didn’t produce any reliable DOHC V8 engines but when the 1UZFE engine came along, it changed the game.

It eventually became a popular option among the drifting community because it was lightweight, compact, durable, and cheap to buy; and let’s be honest, it’s arguably one of the best Japanese dual overhead cam V8 engines ever produced.

Curious to find out why? In this article, we’ll be looking at everything you need to know about the 1UZFE engine.

A Brief History Of The 1UZFE

Even though the 1UZFE engine debuted in 1989, its development began in 1983; that’s 6 years before it was launched to consumers.

Apparently, Toyota’s chairman at the time, Eiji Toyoda, commissioned a secret project with an objective to manufacture a luxury sedan that would compete against German and American brands.

And so the relentless pursuit for one of the greatest V8 engines ever produced began; during the project, Toyota developed 900 engine prototypes and 450 vehicle design prototypes.

After numerous tests and analysis that pitted the prototypes against each other, it was the 1UZFE engine and the Lexus LS 400 designs that came out on top.

But since lab tests are often in a controlled environment, the development team drove the Lexus LS 400 and 1UZFE prototypes in different continents until they clocked 2.7 million kilometers of test mileage.

By the time the Lexus LS 400 and 1UZFE engine was ready for the market in 1989, Toyota had spent over $1 billion in the development phase.

But was the project worth it? Damn right! The engine was durable, reliable, quiet, and cheaper with a better fuel economy than its competitors. It was so good that if you placed a glass of water on top of the engine and revved it to 6,000 RPM, the glass won’t tremble and fall off.

It was even considered to be used as an airplane engine when it was approved by the Federal Aviation Administration; although the plan was shelved before it took off. But to make up for it, the 1UZFE was fitted in Toyota boats and it became a popular option among boat enthusiasts.

But that’s not all; the 1UZFE engine was turbo-charged to achieve 600 HP and fitted in the SARD MC8-R to compete in Le Mans 24-hour race.

To begin with, Toyota’s 1UZFE is a 4 liter 8-cylinder naturally aspirated gasoline engine. The cylinder blocks and cylinder heads are made out of aluminum, and the cylinder liners are made with thin cast iron material.

Between the cylinder banks, you will notice a 90-degree angle design that makes it look like a race engine platform.

However, the 1UZFE engine doesn’t come with hydraulic lifters so that means the engine relies on periodic valve adjustments.

Initially, the 1UZFE engine could achieve 256 hp and 360 lb-ft of torque when it was released in 1989. Toyota then made a few changes to the engine in late 1994 by modifying the connecting rods and pistons to improve the compression ratio and achieve 261 hp and 269 lb-ft of torque.

Here is the engine code deciphered:

Which Cars Are Compatible with 1UZFE Engine?

So what are the cars that came with the 1UZFE engine straight out of the factory?

Believe it or not, the 1UZFE engine was also factory-fitted in the following Toyota boats:

Otherwise, when it comes to engine swapping, the 1UZFE engine can be fitted in most Japanese performance cars; thanks to its lightweight and compact cars.

In fact, if you combine the excellent torque and smooth linear power delivery of a 1UZFE engine and put it on a lightweight rear-wheel-drive chassis like the S13, you would get consistent drifting maneuvers on the race track.

Check out this video of a 1UZFE swapped on the Nissan 200SX S13:

Before you modify the 1UZFE engine, it’s important to service it and replace the water pump, cam belt, tensioner, cam belt idlers, and spark plugs. Additionally, you should change the oil and filter before you start.

The first thing you ought to do is modify the stock power that is capped by the factory ECU. Unfortunately, Toyota stock ECU is difficult to chip or reflash, so that means you need to find a tunable standalone ECU to increase the power.

Since the 1UZFE is an 8-cylinder engine, and you would want to get the best out of it, we recommend something like the Link G4 Xtreme ECU that can run true sequential fuel injection.
The next step is to replace the stock exhaust manifolds with performance-oriented exhaust manifolds.

However, if you’re doing an engine swap, it would be better to fit custom-made high-performance exhaust manifolds. To get that aggressive V8 rumble sound, we recommend a 63mm twin exhaust incorporated into a single 76mm system.

Thanks to the aftermarket ECU, you will be able to get rid of the restrictive stock airflow meter and substitute it with cold air intake depending on the application.

Ultimately, you can expect to gain 15 to 25 extra horsepower after stage 1 modifications.

But if you want to squeeze more power out of the 1UZFE engine, you should consider doing a few adjustments on the cylinder heads. Why? The stock cylinder heads are narrow with a compact design that chokes the airflow and limits the engine power.

Even though you can’t replace the cylinder heads, you can upgrade the engine with heavy-duty valve springs, aggressive camshaft profiles, and multi-angle valve seats. Also, we recommend porting and polishing the cylinder heads.

To top it off, you probably should add high-performance gaskets to improve the sealing and some ARP head studs for a better clamp. There is just one more thing; you can install individual throttle bodies to improve the air intake system. For a sharp throttle response, we recommend two sets of 4AGE 20V throttle bodies.

If you put on the throttle bodies, your engine should sound like this:

After stage 2 modifications, you should be able to easily gain 30 to 45 horsepower.

If you’re not yet satisfied with a naturally aspirated tuned engine, perhaps you should go the forced induction route. We’re talking about turbochargers, superchargers, or Nitrous boost.

But before you proceed with the forced induction, you need to know which engine variant you have; the 1UZFE engine that came before 1994 or after 1994.

Why is it a concern? Because earlier generation 1UZFE engines were made with stronger internals compared to the variants that came after 1994.

However, if you have the later generation 1UZFE engine, it’s recommended to upgrade the pistons and connecting rods.

Otherwise, you can add a single turbo or twin turbos depending on your preference. Usually, turbochargers can help you to achieve up to 450 hp on stock internals, but if you have the first generation variant engine (before 1994), it’s possible to achieve up to 550 hp.

But if you want a supercharger, the most popular units on the market are Eaton M90 and Terminator Cobra. This can boost your 1UZFE engine to about 350 hp; but if you add supporting mods, you can take it all the way to 430 hp.

What about a nitrous system? It’s cheaper than turbochargers and superchargers, but you also need to upgrade your pistons and connecting rods. It’s insane how much power you can gain on nitrous and we’ve seen people achieve up to 800 hp on tuned 1UZFE engines.

There is just one problem though; nitrous is not for everybody and it can be dangerous if it’s not installed properly.

Despite all its excellent attributes, the 1UZFE engine has a few shortcomings. Obviously, if you compare it to most V8 engines today, it doesn’t match up the power. Then again, the 1UZFE power plant is very durable and reliable even when compared to today’s standards.

Beyond that, you will find it hard to access most aftermarket parts that are necessary to modify the 1UZFE motor compared to popular V8 performance engines. In fact, you will probably need to customize specific parts of the engine if you get into more serious engine modification.

Even if you find the necessary aftermarket parts, you’re going to dig deeper into your pockets and probably spend more money on tuning than what you did to acquire the engine.

The rest is not much of a big problem, but more of a basic maintenance issue. Let’s just put it this way; like most engines, you should regularly inspect the alternator, water pump, starter, spark plug, and timing belt and replace them if they’re worn out.

Why do we love the 1UZFE engine? It’s cheap and it can last almost forever. If you put it on a Nissan S13 chassis, it will give you an advantage on the race course due to its lightweight and compact design.

And if you tune it and drift? Whoa! It’s better to experience it than being told.