Nissan RB20DET – Everything You Need To Know

Looking to swap an RB20DET into your Nissan? Want to find more about the RB20 in general? We explore the history and specifications of Nissan’s 2l, six-cylinder screamer. 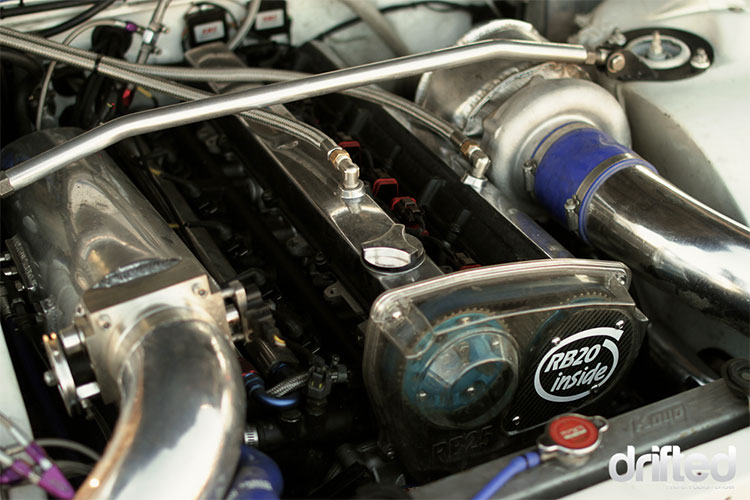 Today, we’re continuing our voyage into the world of Nissan’s engines with a close examination of another of Nissan’s iconic and lasting engines, the RB20DET.

The RB20 engine is one of the larger Nissan RB family of engines that were produced between 1985 and 2002.

Background: Part of the RB Family

The first RB20 engines were found in the Nissan HR31 Skyline and the Fairlady 200ZR which started manufacturing in 1985.

The hopped-up RB20DET fast became a major part of the success of Nissan models such as the Laurel, BNR32 Skyline and the Cefiro.

By the late 1980s, these became known as the “Silver Top” engines. They had originally been the “Red Top” engines until 1988.

The compression ratio was also reduced from 10.0 on the RB20DE to 8.5 on this new model.

The Red Top delivered up to 190 bhp depending on the exact model and specification.

The Silver Top came with further upgrades, including an ECCS system, new camshafts and an increased power output of 215 bhp.

If you are interested in other Nissan engines, you should check out our CA18DET, KA24DE, VR38DETT and VH45DE engine guides.

The RB20DET was a turbocharged version of the RB20DE. This new version made use of a Garrett T28 turbocharger, running a boost pressure of 7 psi.

Below you’ll find the key specifications for the Nissan RB20DET:

Application of the RB20DET

The RB20DET was used in some of Nissan’s most beloved enthusiast models. Below you’ll find a list of cars in which this engine was used as standard:

While the RB20DET was never used as standard in the Nissan S13 family (180sx, 200sx, or 240sx), it has been swapped into many of these models by JDM enthusiasts on the hunt for power.

Part of the popularity of this model comes from the fantastic tuning potential, giving the S13 a much-needed boost from its typical CA18DET or SR20DET engine. Another selling point is the buttery smooth six-cylinder soundtrack – a four-cylinder CA or SR just can’t match it.

In 1993, Nissan ceased production of the RB20DET, shifting its focus instead to the RB25DE and RB25DET, which enjoyed a 500cc bump in displacement. This engine went on to see success in Nissan Skyline (BNR33) range of cars among others.

An Important Distinction – RB20DET Vs RB20DE

Before we get into the weeds on tuning the RB20DET, there’s an important distinction to make. If you currently have a car with the RB20DE or RB20E, don’t make the mistake of thinking that you can tune them in the same manner as the RB20DET.

Don’t forget that the RB20DET was made as a turbocharged version of the RB20DE back in 1985. That being said, it’s not simply a question of slapping a turbo onto your RB20DE and then tuning it the same way as the RB20DET.

If you want to fulfil the tuning potential we talk about below, you need to start with a healthy RB20DET engine.

If you do have the RB20DET, then congratulations because you are currently in possession of an engine with truly great tuning potential. It should be noted, however, that much of the tuning could be classed as “Advanced”.

So, if you’re just starting out, it’s advisable that you seek either professional or highly experienced tuner to make sure you have all the right components and carry out the modifications and tuning correctly.

As with most turbocharged Nissan engines from the 1980s you can have several different paths to go with your tuning. Which path you pick depends on how far you want to go.

Initial mods for a nice performance boost would be an aftermarket air intake and a free-flowing exhaust system. A 2.5″-3″ exhaust system from a reputable manufacturer will really help free up the engine. These modifications will give you a nice bump in power and make that RB20 sound great.

The next stage of modifications will be to upgrade the intercooler with an aftermarket model, add a boost controller, add larger fuel injectors, an RB25/Z32/R25 MAF, a programmable ECU and upgrade the fuel pump.

What dyno results you may get will vary but some enthusiasts have seen 330 bhp (flywheel) on the stock T28 turbo.

The next stage will be to upgrade your turbocharger as that T28 is the real bottleneck on the RB20DET.

A larger turbo will enable you to really open up the potential of the engine, with 400+ bhp on the table, however, once you are pushing towards the 400 bhp mark reliably, you really need to consider forged engine components.

Aftermarket camshafts like TOMEI poncams would also help in drivability with a larger turbo.

If you want to decrease your turbo lag you can also consider increasing the displacement of your RB20DET.

Expanding your engine’s displacement from 2.0L to 2.33L is possible, and can offer a great boost to the RB20DET.

There are several ways to do this:

A – Enlarge the cylinders: If you enlarge to 81mm with Toyota 4A-GZE pistons, then you can boost the displacement to 2.15L. If you go for 82mm with Tomei pistons, you can reach 2.2L.

B – Use an RB25DET crankshaft: This crankshaft and its connecting rods, together with your stock pistons, will give you a modest but noticeable boost to 2.05L.

C – Combine plans A and B: Enlarge cylinder to 81mm and use the RB25DET crankshaft and rods for a significant boost to 2.0L.

D – RB26DETT crankshaft and rods: Coupled with the stock RB20DET pistons, this will get you to 2.1L.

E – RB26DETT crankshaft with Toyota 4A-GZE pistons: This will boost you to a more impressive 2.3L. Using Tomei pistons and enlarge cylinder to 82mm, then you can further augment this to 2.33L.

With so many paths to choose, the RB20DET proves its worth as a tuning-friendly engine.

Depending on your budget and expertise, you can find a way that suits you best.

You also don’t have to face an “all-or-nothing” decision – you can upgrade a stage at a time and see how you get on.

Okay, let’s be honest – no engine is perfect.

While automotive engineers over the years have been getting closer and closer to that perfect engine, we should continue to expect at least some drawbacks with any platform. The RB20DET is no exception.

It is an excellent engine, but below are some things that you need to look out for. Take active steps to avoid these problems to keep your engine safe both on the street and on the track.

It’s true you could say this of any engine, but not every engine has the same exact needs. For the RB20DET, oil changes at the right times are especially important. This becomes even more critical after you have tuned it.

It is good practice to change your engine oil every 5,000 miles. This may seem a little extreme but oil is the lifeblood of your RB20 and if you want it to last, it’s worth the effort. 5-Quarts (4.73L) of 10w40 should be enough to do a complete oil change. Use original Nissan oil filters.

With proper servicing and maintenance to all parts of the engine, you can expect to lengthen its life to as much as 250,000 miles (402,000km) on the extreme end.

2. Keep an eye on the ignition coils

One especially sensitive set of components in the RB20DET, is the ignition coils. Owners have often reported failed starts and misfires, which were subsequently discovered to be caused by worn ignition coils.

Turbocharged cars generated a lot of engine bay heat and failing coilpacks are not unique to the RB20DET, it’s just part of the ownership experience of an old turbocharged Japanese car.

It’s essential that you change the coils at least every 60,000 miles (100,000km). If you experience misfires, check your plugs and if they are clean then check your coilpacks. You can move coilpacks into different positions to see if the misfire changes with it.

3. Be ready for high fuel consumption

While not in the single digits, the fuel consumption rate for the RB20DET is far from ideal at 21mpg (11 litres per 100km). If your budget is sensitive to gas prices, then think carefully before swapping in this engine.

Modern Japanese cars typically feature much greater efficiency, but for an engine first built in the 1980s, it’s not doing too bad, I guess.

Wrapping Up – The RB20DET

Where engines like the CA18DET are solid engines capable of handling a decent power hike, the RB20DET is certainly a step up in its overall performance potential.

This engine has much greater tuning potential, which is why some S13 owners, favor it as an engine swap option.

Whether or not Nissan drivers do a swap for the RB20DET ultimately depends on just how much power and torque you want to shoot for.

For some, the scope of up to 450 bhp and a solid torque curve are enough, but for those who want more, the RB20DET might not be enough engine for you.

In the end, the main keyword for the RB20DET seems to be “solid”.

It’s extremely well built, offers great scope for tuning, and will serve you well on the street or on the track.

It’s a step up from the CA18DET, but it’s not the top rung on the Nissan engine ladder.

Thanks for reading our RB20DET article. If you enjoyed it, consider helping us out by giving the page a share on social media.