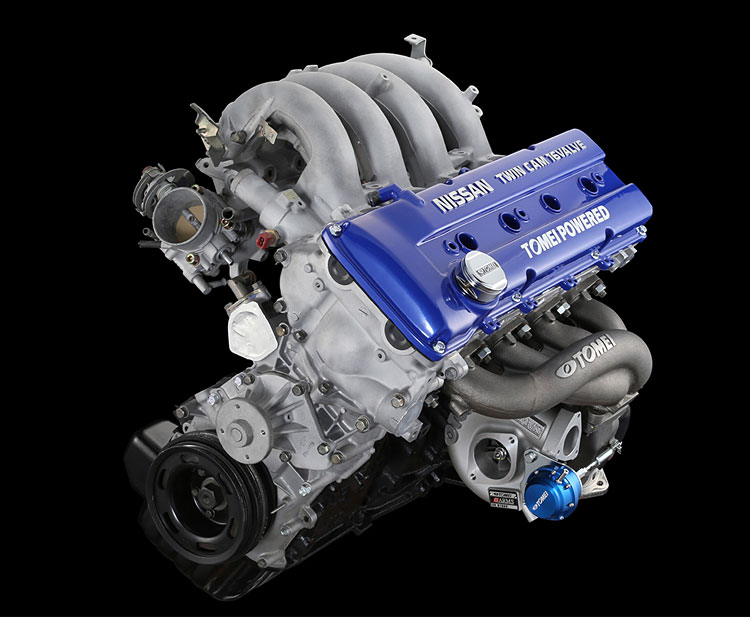 In this guide, we’re going to talk about the Nissan KA24DE engine. If you’re a drifter, then you know it burst onto the scene when the Nissan 240SX was the go-to car for guys who were on a very tight budget but they wanted to get a drift car… or at least something close to it.

Ironically, the Nissan 240SX was not originally marketed as a drift car but as a luxury sports coupe.

However, thanks to its rear-wheel-drive, lightweight, and well-balanced design, it became a popular option in the drifting community. It was also dirt cheap; you could pick up a used Nissan 240SX for about a thousand bucks back in the days.

But today, we’re not talking about the Nissan 240SX (that’s a story for another day), we’re focusing on its engine, the KA24DE.

If you are interested in the Nissan family of engines, then you should check out our CA18DET, VH45DE and RB20DET guides.

Initially, the KA24DE was intended to be used in light trucks and SUVs; that’s why it’s a little bit heavy. However, it was only after Nissan wanted to upgrade the KA24E engine that the KA24DE came about.

Actually, when the first generation of the Nissan 240SX was introduced to the North American market in 1988, it was fitted with the KA24E engine; a 140 hp 2.4 L naturally aspirated engine with a single overhead cam and 3 valves per cylinder.

Later, Nissan updated the 240SX and replaced the KA24E engine with a better and improved KA24DE engine in 1991. Unlike the KA24E engine, the KA24DE was designed with a dual overhead camshaft (DOHC) and 4 valves per cylinder.

Another big difference was that the KA24DE had larger diameter inlet valves, better knock sensors, revised oil pickup, and a compressed ratio of 9.0:1 or 9.5:1. That means it had a higher redline (6900 rpm) compared to its 1988 predecessor (6500 rpm).

Moreover, the KA24DE naturally aspirated engine could reach 155hp with its peak power at 5600 RPM. The peak torque was 160 lb-ft at 4400RPM. However, it still maintained its 2.4L capacity, and the cylinder block was made out of cast iron, while the cylinder head material was cast aluminum.

Nissan ceased the production of the 240SX in 1998, but they still manufactured KA24DE stock engines until 2004.

Here is an interesting break down of the KA24DE engine:

Here is the engine code deciphered for you:

Which Cars Came With KA24E/DE Engines?

Believe it or not, the Ford Corsair that was released in Australia between 1989 and 1992 used a Nissan KA24E engine.

In case you’re wondering, yes it’s possible to swap your non-Nissan car with a Nissan KA24DE engine as long as it fits. Here is an example;

Beyond that, most of the Nissan KA24E engines that were made available in the United States were manufactured in Aguascalientes, Mexico except the power plants in 240SX, FWD U13 Bluebird and 1994-97 Nissan Altima which all came straight from Fukuoka, Japan.

Despite the identical engine code, there is a difference between the Mexican and Japanese block. The Japanese blocks are lighter with larger diameter capped bearings and longer, slightly higher compression pistons in cylinders that increase the power levels.

On the other hand, Mexican built engines are heavier with thicker walls; because of that, they can withstand higher power figures than Japanese built blocks.

However, the easiest way to differentiate between JDM and Mexican engines is to spot the location of the dipstick. Mexican built engines come with the dipstick designated at the rear, while Japanese engines have the dipstick location at the center of the motor.

Here is the thing though; some parts between the JDM and Mexican versions are not interchangeable especially when dealing with the camshafts, oil feed, or pickup. For that reason, you should double-check the details before ordering spare parts. 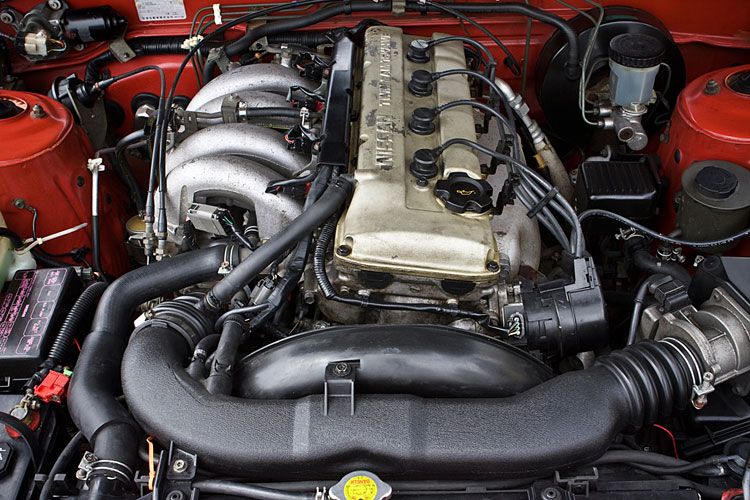 To be honest, the KA24DE engine was nothing you could brag about to your drifter friends when it came out. They were not super fast or considered a great option for drifting unless you had very small tires in your drift car.

Let’s face it, they were one of the cheapest drifting engines and most people bought the 240SX because they couldn’t afford anything else. Fast forward a few decades later and now you could turn a KA24DE engine from just “meh” to “holy cow!”

Its renaissance has something to do with the emergence of better turbo manifolds in the market that took it to the next level.

Of course, it wasn’t until engine control units (ECUs) became more advanced in the past decade that it was now possible to tune the KA24DE engine without blowing it up. Before, most folks were using super AFC or special fuel regulators to take care of tuning complications but they weren’t very effective. To cut the story short, it was bound for disaster until things changed.

Anyway, with the right modifications, you can easily turbocharge your stock KA24DE platform to achieve 300hp to 400hp. Alternatively, (if you’re short on cash) you can do a few upgrades on a naturally aspirated engine to slightly increase its power.

If you’re down for it, what exactly do you need?

It’s possible to boost a naturally aspirated KA24DE engine and increase the horsepower. However, don’t be surprised if you end up spending a lot of money on the supporting mods. For instance, you will need bigger cams, a polished/ported head, a full bolt-on, and a higher compression ratio.

To put it into perspective, you will need to install a cold air intake that will improve breathing efficiency. Next, you should add a 4-2-1 header with a decent free-flowing exhaust system.

We’re not done yet; bring in a lightweight flywheel plus a modern tuned engine control unit (ECU) to complete the set-up. If you do it right, you will achieve around 175hp. Sure, it’s not much but at least you will add an extra 20hp.

Heck! You can even purchase a 240SX Coilover kit to improve your suspension when drifting. Just one thing though, don’t overdo it!

Even if you find a cheaper option, you won’t go far on the horsepower, and the most you could do on a naturally aspirated engine without overwhelming it would be around 200hp. Well, you can’t say the same about turbocharged engines.

Talking about the forced induction, if you turbocharge a KA24DE you can easily achieve 300hp. Better yet, if you do some serious modifications you should hit around 350hp to 400hp.

Obviously, the type of turbo kit that you install will play a big role to determine the power boost of your stock engine. Something cheap like an E-bay turbo or SR20 T25 turbocharger would get you about 250hp to 300hp.

Nonetheless, if you want to go extreme, premium turbo kits such as the Garrett GTX2867R or Tomei MX7960 are capable of boosting your KA24DE engine to 400hp or more.

Anything beyond 300hp and you need to upgrade the internal engine parts (pistons, valves, head).  Also, you ought to balance the engine if you want to reduce vibrations and prolong the engine’s life.

What about pump gas? Most people use a Walbro Fuel Pump up to 400hp. However, beyond 400hp you will probably need to run on E85.

Check out this turbocharged 240SX with a KA engine!

The KA24DE is almost bulletproof! It doesn’t require any special attention when it comes to maintenance. In fact, as long as you feed it with high-grade engine oil, it will probably live longer than a vampire.

Jokes aside, it’s impressive that KA24DE, a 1991 engine, has a better oiling system than most drifting engines today. Not to mention, the cylinder block is made out of cast iron, which is stronger than aluminum.

Another thing; you should do valve adjustments after every 1200 miles.

On the downside, KA24DE doesn’t come with a lot of horsepower from the factory. Sure, you can modify it and increase the power figures; but the more power you gain, the more money you spend.

Despite its durability, we’ve also noticed that the KA24DE engine is a little bit heavy due to the iron block. In the grand scheme of things, that could affect your drifting performance.

Another common problem is a rattling timing chain, which usually happens when the timing chain becomes loose. The good thing is, that often happens when you probably have 100k+ miles on your engine.

Other than that, it could be hard to find some spare parts since the KA24DE engine was not very popular after its initial release.

However, Drifted has got you covered in case you need us to hook you up.

We know what you’re thinking: the SR20DET is a high-revving and factory turbocharged engine that is way more powerful than the KA24DE engine? Is that really a fair comparison? Let us explain.

Back in the days, the KA24DE was no match for the SR20DET; not even close. In fact, it was hard to even find drift games that featured the KA24DE engine. However, as the years passed on, those guys who couldn’t afford a SR20DET could now build a KA24DE engine to surpass the SR. Mind you, that was unheard of 15 years ago.

Apparently, KA24DE has a superior flow compared to the SR. Like they say, “there is no replacement for displacement”.

On top of that, KA stock engines are super cheap but they’re stronger than SR engines due to the iron block. But to give credit where it’s due, stock SR20DET engines are pretty darn good and reliable! Sure, they’re made out of aluminum but it’s a lightweight material that helps to balance the weight on the chassis.

What’s more, it’s much easier to find aftermarket parts for the SR20DET engine since it was popular after its release; although the prices have hiked in the past few years.

It’s no secret, the KA24DE was mediocre when it was first rolled out. But things have changed drastically over the past few years, and it’s now possible to turn it into a powerful drifting engine, especially on a Nissan 240SX.

Of course, how far you’re willing to go is all up to you… and your budget. Regardless, if you need any assistance, you can reach out to us and we’ll be glad to help.

Thinking about an engine swap? Our VR38DETT engine guide is perfect for you.