There’s only so much that Nissan’s stock SR20DET ECU can provide, so we’re explaining everything you need to know when it comes to upgrade time. 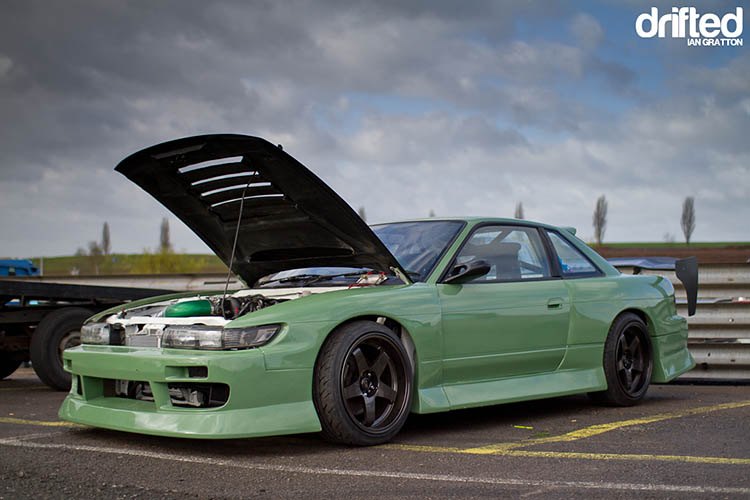 The SR20DET is nothing short of an icon in the Nissan tuner community. It’s all for a good reason, as the engine proved an extraordinary piece of Japanese engineering.

It is lightweight, all-aluminum, and easily capable of pushing surprising amounts of power from its 4-cylinder, 2-liter displacement.

In stock form, the SR20DET can deliver anywhere between 202HP and 247HP. However, with proper tuning, there is hardly any limit to what the engine can do. For example, check out this epic 700hp SR20DET build by Lone Star Drift.

As seen in many of your favorite drift games, it is clear that the SR20DET has a lot of potential for power upgrades. In terms of physical engine changes, most upgrades consist of:

However, even with all the upgrades, you’ll fail to attain peak power from the SR20DET engine unless the engine’s “brain” is upgraded too. Serious upgrades like the ones listed above require a new ECU to handle all the extras.

Why Upgrade An SR20DET ECU?

When Nissan created the SR20DET, though it was overengineered to withstand more than factory power figures, the ECU wasn’t designed similarly.

The OEM ECU (part number 2371050F10) would only support basic functions and would not allow much leeway in performance tuning.

So, what do you get from an aftermarket performance ECU when coupling it to the 180SX SR20DET engine?

Here are some of the most interesting functions the SR20DET gets unlocked when replacing the OEM ECU for a modern one:

The list of features unlocked with an aftermarket ECU expands with tens of features otherwise unavailable on the standard SR20DET ECU. This will make the engine suitable for racing or drifting applications, allowing many configurations and fine-tuned settings to be applied to your Nissan 180SX.

When Is Upgrading Essential?

When is the right time to go for an aftermarket ECU for your Nissan 180SX boasting the SR20DET engine?

For starters, it is not advisable to first replace the ECU immediately. You can do plenty of other upgrades to your 180SX before switching the ECU becomes essential.

Once you get the engine upgraded, fuel flowing correctly, and the transmission in good order, fine-tuning is the only thing left to do.

At this point, you should consider ditching the standard ECU and going for an aftermarket option.

While the focus is primarily on standalone ECUs, there are a few worthy mentions of engine management adaptors that can work with the original ECU, boosting its functionality, admittedly not to the same extent as a fully-fledged standalone ECU.

Once you’re ready to invest in an ECU for your SR20DET, there you’ll realize there’s a wide selection available on the market.

Not everyone will need the most expensive, premium features, but there may be some that could become a tempting prospect.

Let’s take a look at some of our favorite SR20DET ECUs. 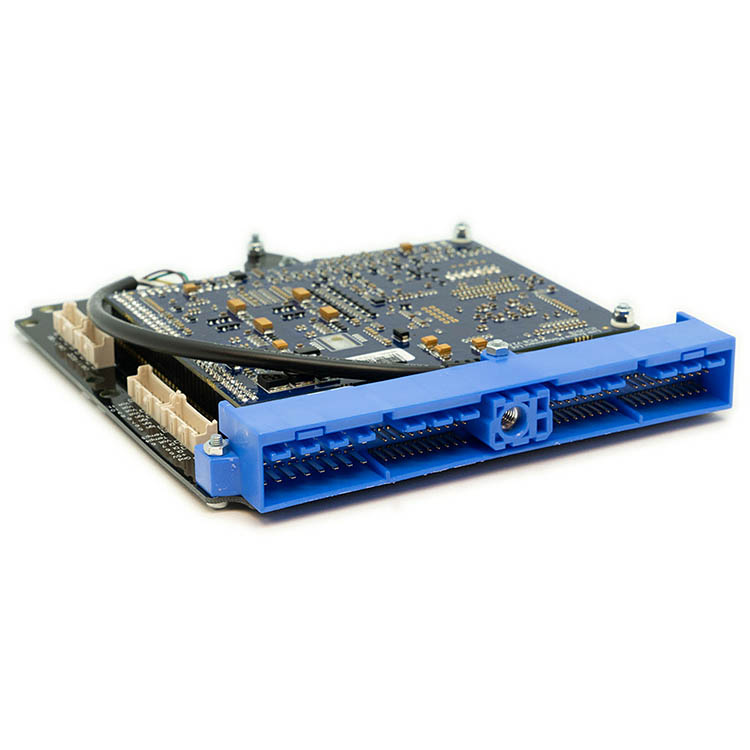 One of the more familiar choices for SR20 enthusiasts when it comes to engine management is the Link G4X plugin 76-pin ECU.

Built by Link ECU, the G4X fits into the original SR20DET enclosure and connects to the standard 76-pin interface of blue-header OEM ECUs found on the 180SX.

While it is unlikely anyone is interested in an automatic gearbox for their 180SX, it must be noted that the Link G4X only works with manual gearboxes.

One of the advantages of the LINK G4X is the onboard MAP sensor for either 4 bar or 7 bar. This will allow for faster upgrades in terms of intake – revised intake manifold, a bigger turbo.

With the 6D fuel and ignition mapping support, the Link G4X ECU can be used to fine-tune the fuel delivery needs of the SR20DET engine.

This happens when the ECU controls the pulse width of the fuel injector. In simpler terms, Pulse width (PW) is measured in milliseconds and can be described as the amount of time an injector is open, allowing fuel to be sprayed in the cylinder.

Fuel trimming allows the ECU to either add or subtract fuel from the fuel map depending on how the oxygen sensor on the engine measures the mixture.

Besides the multi-dimensional map, the Link G4X ECU will also provide motorsport-specific features:

Anti-lag is a very common technology on tuner cars featuring one or more turbochargers. The anti-lag technology exists to ensure the engine is pressurized with boost at all times.

A turbo usually takes time to spool up as the exhaust gases spin the turbine, and as such, you literally have to wait for the boost to kick in.

What anti-lag does is either adjust the ignition timing to induce a spark into the exhaust or enrich the air/fuel mix to generate a spark in the exhaust manifold.

Regardless of the process, the end result is the same: the turbo is kept spooled up, and your engine´s horsepower and torque are available almost instantaneously.

Coming off the start line fast and with minimum wheelspin is the dream of most racing enthusiasts.

Constantly tinkering with the throttle pedal at the start line is one way to get that sweet-spot RPM. However, it takes a lot of time to master, and it highly depends on your engine mapping, tires, suspension, and gear ratios.

Instead, the launch control system found in the LINK G4X ECU lets you establish a particular RPM from where to launch off into the track. No more playing with the throttle pedal.

If you strap your ECU to an SR20DET engine connected to the wheels via a sequential transmission, gear shifts can get even shorter by flat shifting.

When flat shifting, the ECU cuts the fuel flow to the engine for a set amount of time, allowing the gear change to happen.

One of the more sought-after aftermarket ECU upgrades for SR20DET-based drift cars, the MaxxECU PRO ECU offers a plethora of functionality, allowing tuners to set up engine parameters to the finest detail.

MaxxECU PRO serves not only those who just want to boost the performance out of a 240SX or a swapped 180SX but also enthusiasts looking to go into the professional area, where ground-up builds and precise engineering become the norm.

This happens thanks to the extended functionality and adaptability of this aftermarket ECU.

Finally, the stock airflow meter must be replaced by the MaxxECU built-in boost sensor, allowing it to handle pressures up to 43psi/3bar.

Among the most essential features delivered, MaxxECU PRO provides:

Most piggy-back style fuel controllers for tuner cars come with severe limitations regarding available functions or the hassle of adjusting the wire harness and working on compatibility.

However, the APEXi Power FC engine management system is a standalone, dependable unit.

Built specifically for the SR20DET, it meets the performance demands of the S13 engine, accommodates high power upgrades, and can hold its ground against most racing or drift configurations of the 180SX/240SX.

The Power FC replaces the original ECU and requires minimal electrical rewiring only on a few vehicles.

In the case of the SR20DET, the Power FC is plug&play, not tampering with any of the other car accessories, for example, air conditioning.

APEXi Power FC comes with pre-programmed maps for the SR20DET engine and a base map that can be tuned for further performance.

Optionally, the FC COMMANDER control module can be acquired alongside the APEXi engine management unit, allowing for easier tuning of several engine settings.

The optional Boost Control Kit helps SR20DET owners to fine-tune the boost for any application, making it easier to set up to 4 boost presets and switch between them depending on the driving stage. 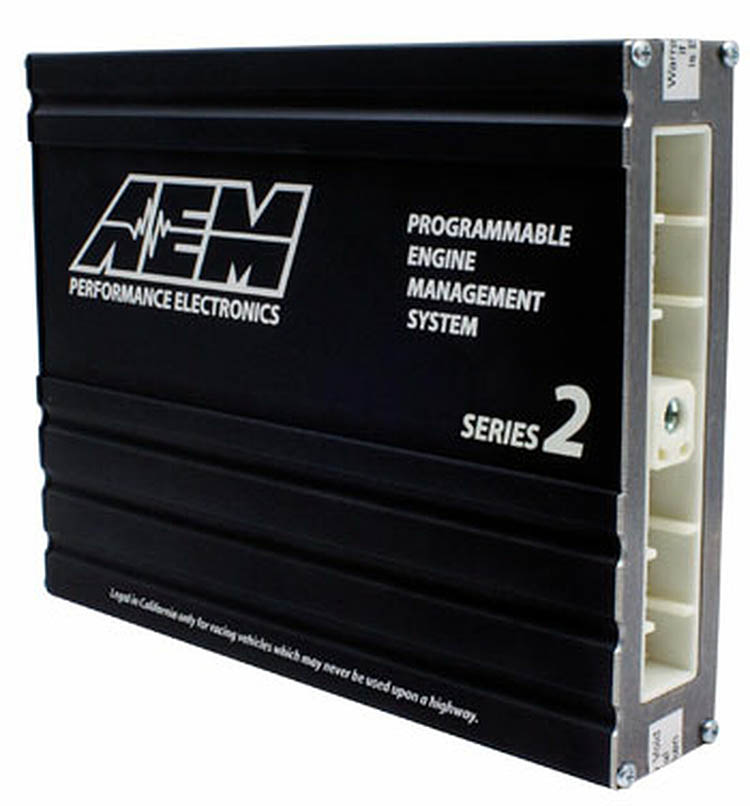 One of the oldest names in the business, AEM was the first company that offered a standalone engine control unit that fits within the stock harness and worked with stock sensors.

The AEMtuner Software that comes with the EMS Series plug&play engine controller is known throughout the tuner community for its reliability and adaptability.

The AEM EMS Series 2 does not require any extra wiring. The software runs on Windows and provides an intuitive interface where all the sensor data can be viewed, compared, and manipulated to squeeze all the potential out of the engine. It allows for base map creation using the integrated wizard.

The engine management controller can handle:

In terms of functionality, the AEM EMS Series 2 gives complete control over idle, allows you to program the traction control system, keeps knock to a minimum, and integrates two-step launch control.

Furthermore, it brings the possibility of soft-cut rev limiters, electronic boost control, and wet or dry nitrous control for those going all the way. 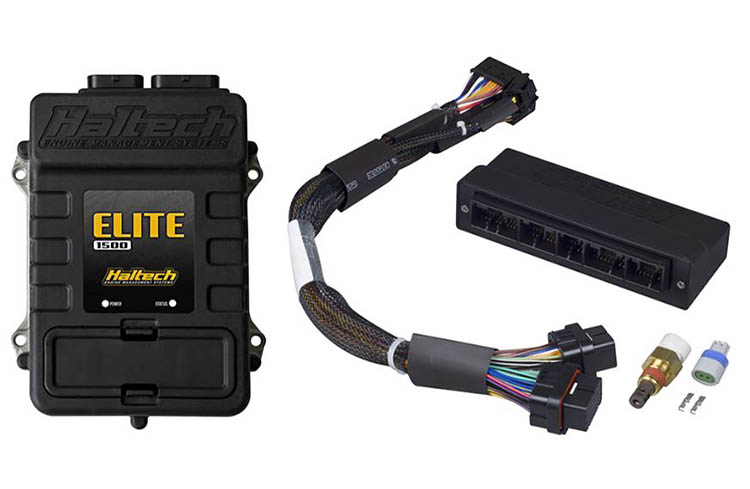 Last but not least, the Haltech Elite 1500 is another common choice for tuners and racers who want to squeeze all the performance out of the SR20DET engine.

It is a plug&play kit, allowing you to use the stock harness via an adaptor kit.

For endurance racing fans or generally trashing the tarmac no matter the weather conditions, the Haltech Elite 1500 ECU comes in a waterproof case, completely sealed from the environment.

It works with up to 12 cylinders, so it can handle everything the SR20DET throws at it.

While it works with stock Throttle Position Sensor, stock MAP, or MAF, switching to a high-pressure MAP is recommended to not limit the engine output, especially once the turbine and exhaust manifold has been upgraded.

The Haltech Elite 1500 supports connections to various display dashes and other expansion devices via CAN. It allows for 12 digital outputs and 10 analog voltage inputs, and 4 synchronized pulsed inputs.

Besides, there are 3 dedicated inputs for knock, ignition switch, and onboard MAP Sensor.

Here’s a video from xgrapher on Youtube, providing a preview of the Windows-compatible Haltech Elite 1500 ESP Calibration Software:

Once you have undergone the in-depth upgrades and tuning of your SR20DET engine, slapping on a suitably capable racing ECU is a must for all racing and drifting applications.

Given the wide adoption of the Nissan SR20DET, a wide variety of plug&play ECUs are available on the market, all providing virtually limitless configuration capabilities.

It’s about choosing the one you would be most comfortable with for your project, and we hope this guide has helped you make a well-informed choice as to which one best suits your needs.

Thank you for reading our SR20DET ECU guide.

If you enjoyed this article, please share it with the buttons at the bottom of your screen. If you’ve found this information useful, then please take a moment to share it with other s-chassis, 180SX, 240SX, S13, and S14 enthusiasts. We appreciate your support.

We thank the following entities for the use of their photography in this article: