Looking to boost your Z? We look at the best 350Z turbo kits available on the market today. 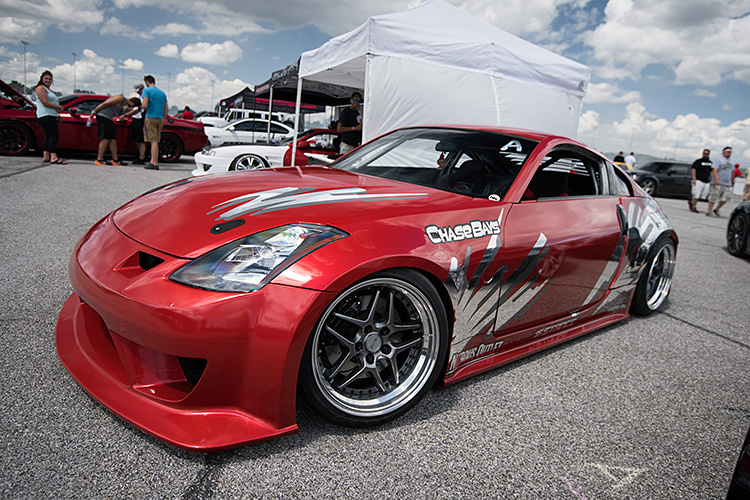 The Nissan 350z is a solid sports car with great performance, handling, and braking capabilities; especially if you’re into drifting.

Actually, the 350z is one of the few cars to achieve a perfect 100 percent score at a drift racing exhibition in Las Vegas Motor Speedway back in 2006. No wonder, it was the car of choice by the “Drift King” in The Fast and the Furious: Tokyo Drift movie, and features in most drift games.

Sure, a naturally aspirated Nissan 350z V6 engine can give you 287 hp to 306 hp (which is not bad), but if you want to take it to the next level, a turbocharger will do the trick.

In this guide, we’re going to discuss turbocharging a Nissan 350z. What mods do you need? How far can you push it? What are the best Nissan 350z Turbo Kits on the market? Let’s get down to it.

Before we look at the concept of turbocharging, let’s first understand a naturally aspirated engine.

For starters, a naturally aspirated engine uses atmospheric pressure created by the pistons to suck in air and fuel mixture into the combustion cylinders to generate power. Basically, the air is the catalyst that causes the fuel to burn faster and more efficiently.

Sure, a naturally aspirated engine can draw the air into the cylinders just about right, but it’s limited by its size and displacement. But what if you can force more air into your engine and increase the horsepower? Now that’s where forced induction comes in.

A turbocharger is a forced induction technique; it relies on the exhaust system to channel more air into the combustion chamber. When your engine lets out exhaust gases (burnt fuel and air), the exhaust passes through the turbocharger’s turbine causing it to spin and direct the air to a second fan connected to an air inlet.

But we’re not done yet; the air inlet sucks in air from the other side which is then compressed and rammed into the intake manifold.

It’s almost like how the turbines on a jet engine can suck you right in if you stand closer, albeit the fans on an automobile turbocharger are smaller and they suck in air through the exhaust system to boost the horsepower.

Since the Nissan 350z is engineered with a VQ engine (VQ35DE or VQ35HR), you shouldn’t have a problem installing a turbocharger and giving it more power on a stock motor. But how far can you push it? Well, we will get down to that in a minute.

The age-old debate; which one is better? Single turbo or twin-turbo? The short answer is….it depends.

A single turbo is cheaper compared to a twin-turbo. Besides that, a single turbo can give you just as much power as smaller twin turbos, although it will boost at mid to high RPM.

On the downside, it takes more time for a large single turbocharger to compress air into the intake manifold. That means you will have turbo lag issues on a single turbo.

Twin-turbo chargers solve that turbo lag issue by using two small turbochargers instead of a single large turbocharger that will take a longer time to spool up. For that reason, turbochargers are suitable for low to mid-range RPM. However, most twin turbochargers with the same size don’t boost a lot of power at high RPM range than a big single turbocharger.

Alternatively, if you use sequential twin turbos (a small and a large one), you can balance the boost at both low and top-end RPM range. Even if you have everything figured out, twin-turbos are more expensive and complex to tune than single turbos.

In a nutshell, a single turbo is ideal for drag racing and twin turbos are suitable for drifting and exiting corners.

What Supporting Mods Do You Need?

To get the best performance out of your 350z, you can add a few accessories and supporting mods. What exactly are we talking about?

Cooling System. Forced induction generates a lot of heat; that’s why turbocharger kits are usually sold with intercoolers. Beyond that, you can take it further by upgrading the radiator, oil cooler, transmission cooler, and thermostat.

Fuel Accessories. Since the purpose of a turbocharger is to pump more air into the engine so it can burn fuel efficiently, it would be better balanced if you also upgrade the fuel accessories. That means you should upgrade the injectors, fuel pump, fuel rail, and pressure regulators.

Drivetrain Accessories. You will need to upgrade your clutch because it will be just a matter of time before your OEM clutch gets worn out. Also, you should consider switching to a lightweight flywheel to improve acceleration.

High-Performance Oil. The VQ engine in a Nissan 350z has a habit of sucking oil like an elephant. Well, not literally but you get the point. Suffice to say, if you add turbochargers, it will consume more oil. In that regard, the best solution would be to switch to high-performance oil that can withstand extreme heat.

Note: Your Nissan 350z can do just fine without most of the supporting mods we’ve mentioned, but if you want longevity and peak performance, you should look into upgrades.

How Far Can You Push the Stock Engine?

The VQ35DE stock engine on a Nissan 350z is almost bulletproof and if you tune it with turbochargers, you can easily achieve 400 whp to 420 whp. Can the VQ35DE stock motor do more than that? Yes, but the problem is longevity. If you try to exceed its limit, you won’t have much of an engine after a short while.

On the other hand, the VQ35HR stock engine can handle more power; 450 whp to 500 whp. It is a monster with stronger internals, dual throttle bodies, and better engine components. Of course, just like the VQ35DE, the end result depends on the supporting mods you’ve added to your engine. However, be careful not to push it too far, or else it will fail.

Let’s have a look at some of the best 350z turbo kits available. 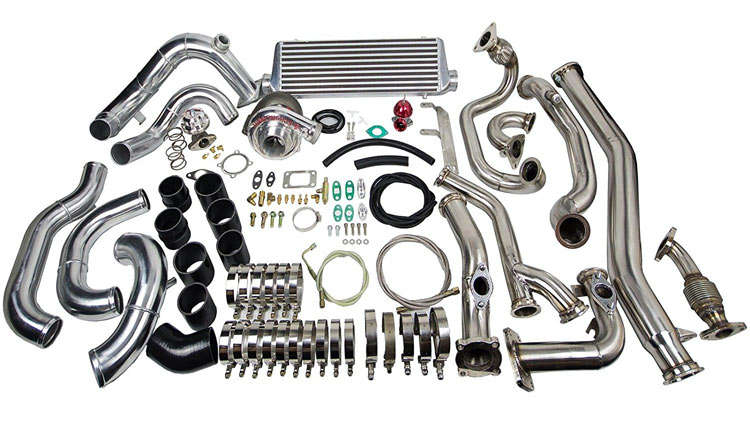 Manufacturer: Turbonetics
Fitment: 03 to 06 Nissan 350z, G35
Turbo Configuration: Single
Value for Money: 4/5
Our Comment: This is an inexpensive option and with the right supporting mods, it can boost your 350z stock motor up to 450 hp or about 400 whp. Since it’s a single turbocharger, it’s easy to install; although you will need a professional to do that job.
What’s more, it’s made of stainless steel to improve durability, and if you run into issues, it comes with a 1-year warranty. Fortunately, Turbonetics has a good customer care service and they should sort you out in case of any problems.

We recommend that our customers use bigger injectors (such as 600cc +), a bigger fuel pump (255l), and an upgraded ecu reflash / program 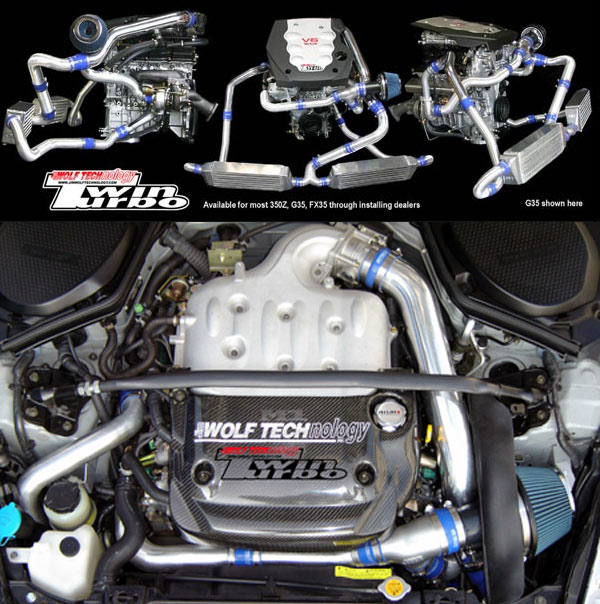 Manufacturer: Jim Wolf Technologies
Fitment: Nissan 350z (VQ35DE), G35
Turbo Configuration: Twin
Value for Money: 5/5
Remember that turbo lag issue that we were talking about earlier? This is a twin-turbo and it doesn’t have that flaw.
The thing about this JWT twin-turbo kit is that it almost looks like an OEM component when you install it. Sure, the installation might be a little bit complex compared to a single turbo kit, but it comes with a very detailed instruction manual to make it easy.
On the performance part, it will boost your VQ35DE stock engine by 125 whp with no serious modifications; although it’s possible to get more out of it.

Manufacturer’s description:
JWT originally designed this kit as a feasibility study in conjunction with Garrett and Infiniti’s product planner at the time. The kit is designed around the O.E. criteria for reliability, no boost lag, and safe but significant power levels. The JWT Twin Turbo Kit has accomplished this and more over thousands of miles of reliable track and street use since its release.
All critical airflow junctions use application specific castings to maximize flow and eliminate boost lag. Turbo outlets have isolated waste paths to improve turbine efficiency. JWT has combined high efficiency Garrett GT Ball Bearing Turbos, Garrett charge cooler cores (700+hp rated) with over 300 individual parts, to create the most complete and reliable bolt on forced induction system available for Nissan and Infiniti VQ35 vehicles. 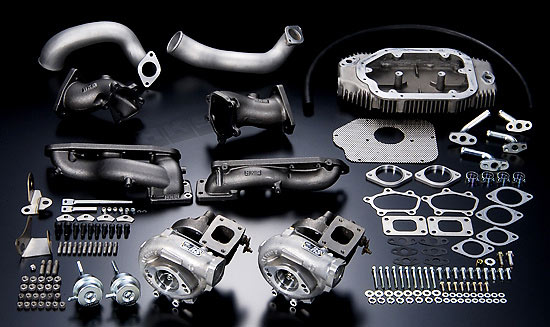 Manufacturer: HKS
Fitment: 2003-2005 Nissan 350z, G35
Turbo Configuration: Twin
Value for Money: 4/5
This product is made by a Japanese brand (HKS) and one of the most popular manufacturers that deals with aftermarket automotive spare parts; you’ve probably seen their logo on racing video games like Gran Turismo and Need for Speed.
Anyway, this full twin-turbo kit can boost your stock engine to at least 400 whp. Moreover, it comes with everything that you need to sustain optimal performance; except for a few things like the suction pipe, oil inlet fittings, and engine management system.

Manufacturer’s description:
Twin Turbo Set Up Kit with turbochargers for high power spec Z33.Turbines can be selected from quick response GT-SS, well-balanced GT2530, and high power GT-RS. Stock catalytic converters can be used with the kit. In order to install Set Up Kit, some modifications, making suction, and other pipes and ECU setting are required. 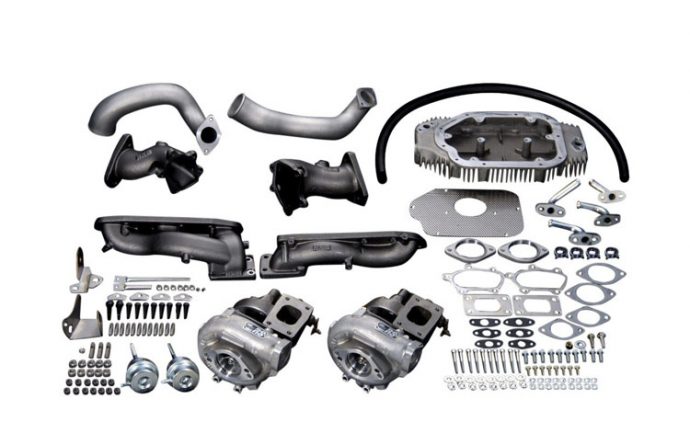 Manufacturer: HKS
Fitment: 2003 – 2005 Nissan 350z, G35
Turbo Configuration: Twin
Value for Money: 4/5
This is another turbo kit made by HKS, but they’re a little bit bigger. That means it’s ideal for drag racing when you hit those mid to high RPM. As for the material, the turbos are made up of high-quality aluminum material that doesn’t rust or wear out easily due to the intense heat.
The good thing about this turbo kit is that it’s cheaper and less complex to install compared to its counterpart.

Each HKS Full Turbo Upgrade comes packaged with all the necessary hardware to provide a complete installation. 2003-2005 NISSAN 350Z BASE Cylinders V6 Liters 3.5 FitmentNotes Rev-up and HR motor not tested.

Definitely, T3 TURBONETICS BOLT TURBOCHARGER KIT is the best bargain choice. Its price is almost half compared to other turbo kits on our guide. Not to mention, it’s a single turbocharger that can give you just as much boost as twin-turbos; although you need to hit mid to high RPM to unlock the boost.

However, without a decent cooling system upgrade on the radiator, oil cooler, transmission cooler, and thermostat, the high temperature it generates at higher RPM can overwhelm your motor.

The HKS GT Full Turbo Kit is our best premium choice, mostly because it includes almost everything that you may need. Besides that, the twin turbos can give you a boost of up to 400 whp with no turbo lag. If you’re not convinced yet, the kit is made by HKS; one of the most reputable Japanese manufacturers of aftermarket accessories.

We think the Jim Wolf Technologies Twin Turbo Kit is the best overall choice based on the following reasons.

First, it’s made by Jim Wolf Technology, a company that has more than 30 years’ experience manufacturing auto parts for Nissan. No wonder, the turbos have the most OEM-like design on our guide.

Also, they’re not easy to find and you must place a special order.

Most importantly, they’re durable twin turbos with no lag issues. In case you’re wondering, this would be the ideal twin turbo for drifting and exiting corners.